A number of new modern commercial and luxury residential developments, including hotels, are on track to come out of Cape Town’s soil, setting existing establishments in the area aflutter with dreams of tourist gold.

Despite a tight economy, Cape Town has seen a new wave of property developments worth billions in the past year.

But some property analysts have raised concerns about the commercial property vacancy rate, saying the sector has been struggling to regain its former “boom time glory” of more than a decade ago.

However, in this period of crisis, some property businesses opted to streamline and restructure, rather than follow construction giants such as Group Five into business rescue. By adjusting their business models, ensuring market agility and in some cases reinventing themselves, forward-thinking property developers were able to profitably and sustainably weather the storm.

Taking a bet on an economic recovery in SA over the next few years, Amdec Group, is trying to repeat its success in Cape Town with its new development, Harbour Arch, about 4km from the V&A Waterfront.

Amdec is same the company that built parts of Melrose Arch in Johannesburg and is about to break ground on the first phase of a R14bn property development in Cape Town that is arguably the most ambitious to be built in the Mother City since the Waterfront.

Construction is due to begin in the first quarter of this year. 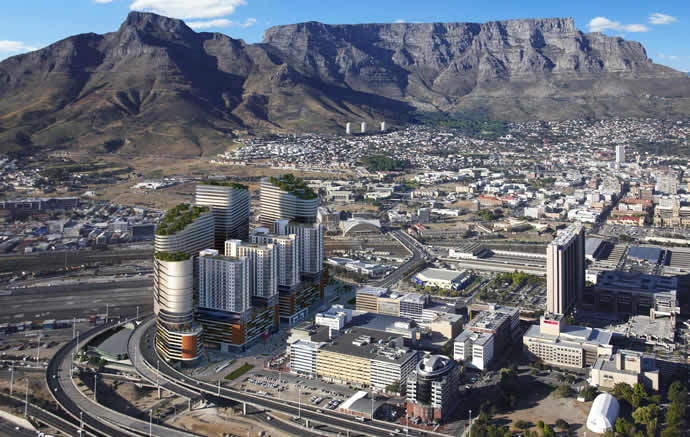 The City of Cape Town’s municipal planning tribunal last year approved the development, which will compete with the waterfront for residential tenants. The Waterfront, valued at nearly R20bn, is SA’s most-valued commercial asset.

Described as a mixed-use precinct the 5.8 hectare Harbour Arch is set to feature 6 individual tower blocks and 200,000m2 of usable space for residential, retail and office space. 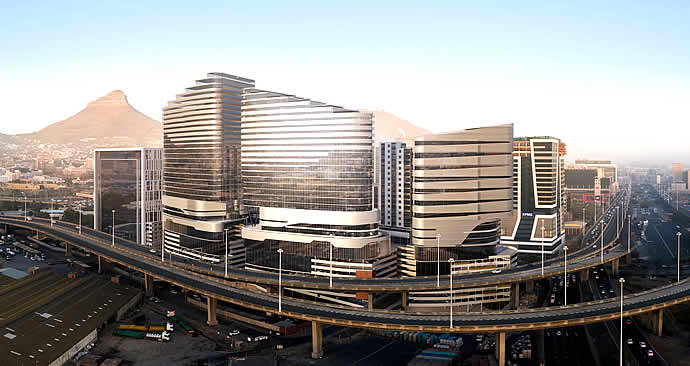 The Harbour Arch occupies a strategic position at the convergence of major access roads, with easy entry points to and from the N1 and N2 highways. The parcel of Foreshore land was previously owned by Transnet, but has since been bought by Amdec.

The central city is the traditional CBD or downtown of the Cape Town metropole, and lies within a 1.62 square kilometre area managed and promoted by the Cape Town Central City Improvement District (CCID).

This area is bordered to the northeast by Table Bay harbour including the V&A Waterfront, and by the largely residential suburbs around the rest of its perimeter known as the Atlantic Seaboard (to the northwest), the City Bowl (to the west and south), and District Six and Woodstock (to the southeast).

The report shows that an incredible 31 developments were in the pipeline as of the end of 2018. Eight of these developments are currently under construction (or have been completed in 2019), 11 are in the planning stage and 12 are still proposals.

Property developer Abland, in partnership with Giflo and Nedbank, will construct a new mixed use skyscraper in the Mother City – The Rubik – which will include premium office space and luxury apartments. 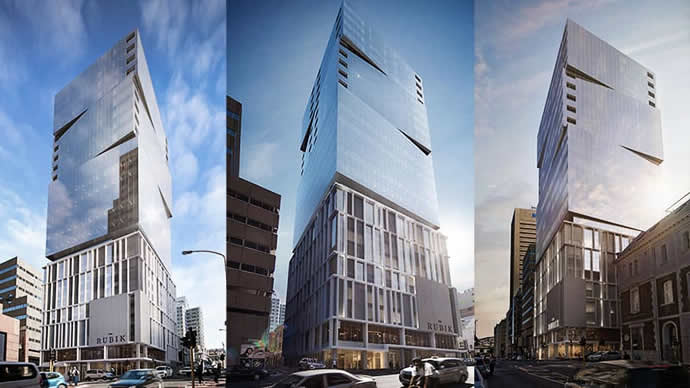 The building has been designed by architect firm dhk, and features a stacked glassed tower block which, as the name suggests, angulates at various points to represent cubes.

According to Abland, the development will cost around R480 million, with completion targeted for 2021.

The Rubik will feature luxury apartments starting from R2.4 million, and will have penthouses with floor-to-ceiling windows, a 24-hour concierge security, underground parking and easy access to lifestyle features of Cape Town’s CBD.

Despite delays due to city approvals and funding hurdles, construction on the Zero-2-One Tower – which will become the tallest building in Cape Town.

The R1.3 billion city centre project is located on the corner of Adderley and Strand Streets, and is being led by developers FWJK.

The latest proposal from RAS Architects is for a 192 metre tall skyscraper office building called Cullinan Square – on what is currently only known as ‘Site D’ in the city.

According to RAS, the 42 floor tower is designed to be a mixed-use development, and would be the tallest building in Cape Town – trumping the yet-to-be developed Zero2one, which is expected to reach 148 metres.

RAS said the orientation and shape of the tower has been designed in collaboration with engineers to deal with the winds “in an economic manner” – while also keeping the city’s famous views of Table Mountain and the surrounds.

It will feature a hotel component that occupies the highest part of the tower, with a sky lobby, restaurant, spa and observation deck at the top of the building.

The ground-level retail component promotes public activity and acts as an economic boost for development. In addition to pedestrian access, the retail component is also supported by the basement parking levels, nearby public transport hub, surrounding office buildings, and the 20 levels of prime office space in Cullinan Square, the group said.

Developers and architects FKJW are also planning to add to the Cullinan Square and Zero2one with a third skyscraper in Cape Town called The Vogue. 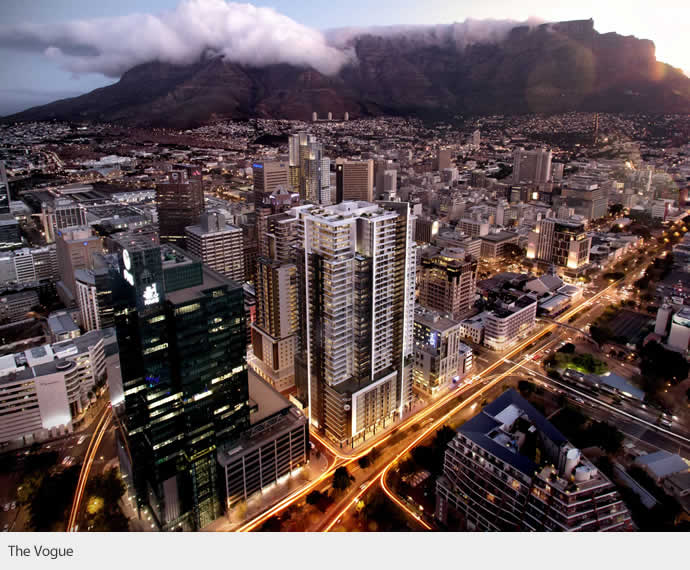 The building is a 42,000 m2 mixed-use development that is one floor lower (31 floors) than Cape Town’s current tallest building, the FNB Portside building which sits adjacent to it.

The residential apartments in The Vogue will offer a range of studio, one bed, two bed and three-bed apartments including top-level penthouse apartments which will all enjoy panoramic views over the Atlantic Seaboard.

Ground floor shops will provide an active retail edge to along all three streets including restaurants and other retail activities necessary for inner-city living, the developer said.

Construction is expected to be completed by October 2020.

The Modern is a R1.5 billion development expected to be completed within the next three years. 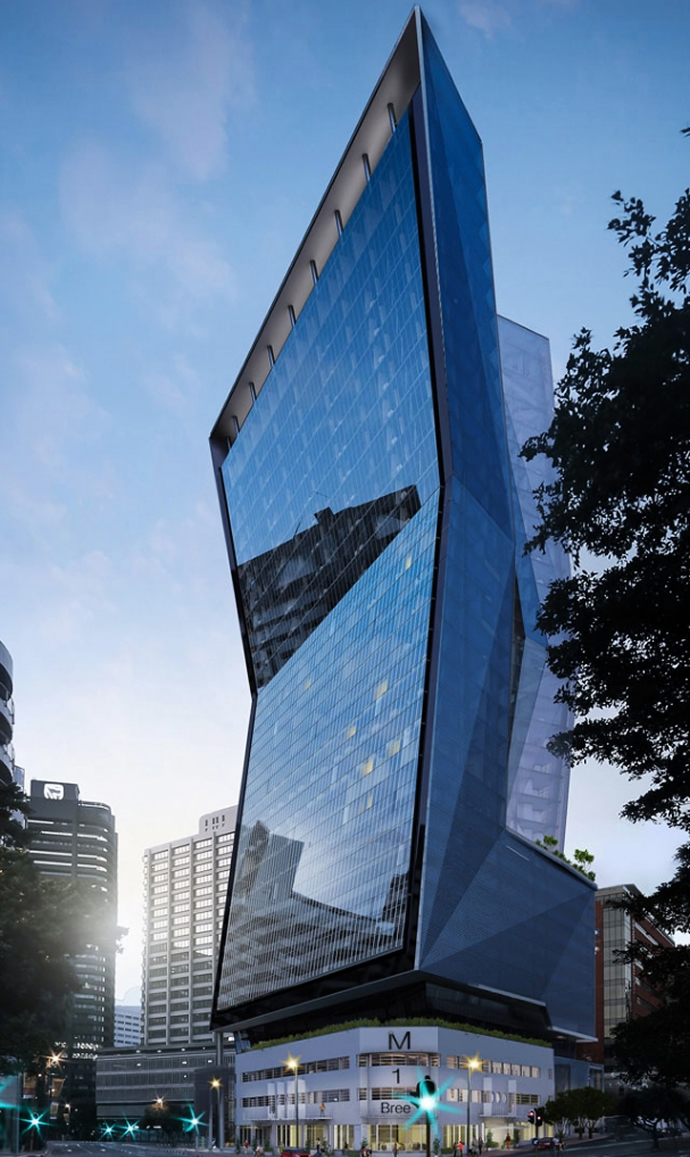 According to developers, Ingenuity Property, the building will be located on the corner of Bree, Loop and Hans Strijdom Avenue, and will combine the old with a new ‘post-modern’ style.

The building will feature a high-rise glass structure on top of a podium base, with a ‘twist’ to the facade, adding shape.